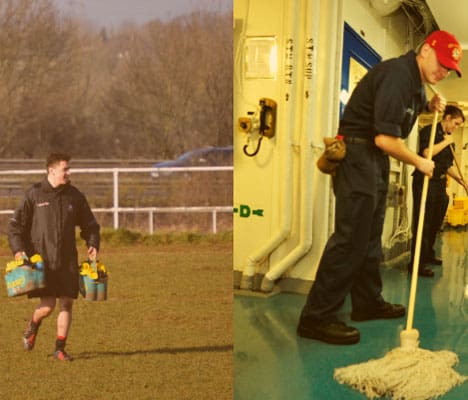 You are here: Home / All Posts / Why the “Waterboys’ and ‘Janitors” MATTER in your organization

“You are either with us, or against us. There is no in-between.”

There may be a constant dogma, that the “Janitors” or the “Waterboys” are in that category of just “those other guys” in the organization. Hence, it may be believed you don’t need to invest much in them, or even give them a duty that really matters in your organization. You can just let them hang out, do whatever, as long as they don’t harm anybody it’s no big deal.

Here’s the thing though, in any organization, you are either with that organization and actively helping it achieve its goals, or you’re against it.

If you aren’t adding any value to the organization, then by definition– you are a waste of space. The reason for this being that your space, your position, can be easily filled with someone or something that will add value, and increase the organization’s performance.

In the end, if you want to perform at your peak, as a team, you need to factor in every person, every nuance, and be resourceful. You need to be able to find ways that they can all contribute to keeping things moving as a chain. Furthermore, the small little duties that appear to not matter, you will come to find out over the long-haul, do in fact, actually matter to the big picture.

Considered, It is important that you spend time with guys that might not think that they matter much, and ensure them that they do in fact matter. In a sports sense, this can be guys like team waterboys, film crew, guys who don’t play much, etc.

It is tough to focus on these guys in-season because most of your attention is directed towards the starters and the “big name guys”. However, over the long haul, it is important you keep those non-starters clear about their value to the team. For instance, let’s consider the film guy, they may not think they add much value to the team because they don’t play. They may think all they do is just sit there on a scissor lift and push start and stop for a few hours. However, when you tell them how much film the team watches, how the coaches break down film to give to certain positions, help analyze what works, what isn’t working, and review all of the following with the team; as well as, how if it weren’t for them getting the footage in the first place, none of this would be possible, now, they can see more clearly the value they bring to the team. The film person can now see how their “small” duty, is an intricate part of the whole team’s collective success.
Now you can see they’re not JUST a film guy, they’re a contributing member of the organization who’s assigned task in that system happens to be taking care of the film.

Albeit, you might say, someone else can fill those shoes, but who’s it going to be? an assistant coach can’t do it, you can maybe have an injured guy do it, but what if he’s the one getting waters? There has to be someone getting guys waters between drills.

If you want to have a high-intensity practice, as a coach, you can’t keep stopping practice to get your players water, that’s valuable drill time. Nonetheless, a quick water break isn’t really going to restore your hydration that much. You should be drinking water after reps and in between drills continuously, replacing what you’re losing if you’re practicing at high intensity. This ensures you maintain hydration throughout the whole practice, which is essential for practicing how to be able to last a full game. At the same rate, you can’t have a good high-intensity practice by continuously doing things at high speed and denying a team water. This only ensures you do not get the most out of your practice. At most, you are maybe training a little mental toughness imploring this method, from an execution standpoint however, it is completely asinine. To get the most out of your limited time to execute and get better, you need to do things well and maintain hydration so performance stays at a high level.

This is the importance of having a waterboy, it allows you to maximize time, productivity, and execution. Now you can see this person isn’t just some other waterboy, they’re a contributing member of the team who’s assigned task in the system happens to be filling up and getting the team water when they need it.

You want high speed, high performance, and in order to do that you need all guys on deck.

Importantly, it is also necessary to consider the guys who do not play as well, it matters to give them duties every now and then so they feel like a part of the circle. Reassuring these guys of their value and their purpose on the team, as evidenced by science, will increase their motivation and performance, and the better they do their specific job within your system; the better overall your system will do.

Whether it’s the “Waterboy”

The “Person who gets the coffee”

Every person, every little detail, collectively adds up to the big picture and how that will look like.

Trimming the fat, and getting rid of those who are not providing value, and replacing it with people who will give value is going to increase organizational effectiveness. Moreover, Giving people tasks that may seem pointless, aren’t always so pointless after all, and can even help guys feel more as a part of the team. This helps to increase the sense of family, brotherhood, and unity among all of the collective individuals.

Regardless of the duty, giving someone a purpose to a larger cause will actually make them do better. If they do have a purpose already, reassuring that purpose to them, helps to amplify those effects, get them to buy in more, and increase the performance of them, and thus, the organization as a whole.

Please log in again. The login page will open in a new tab. After logging in you can close it and return to this page.