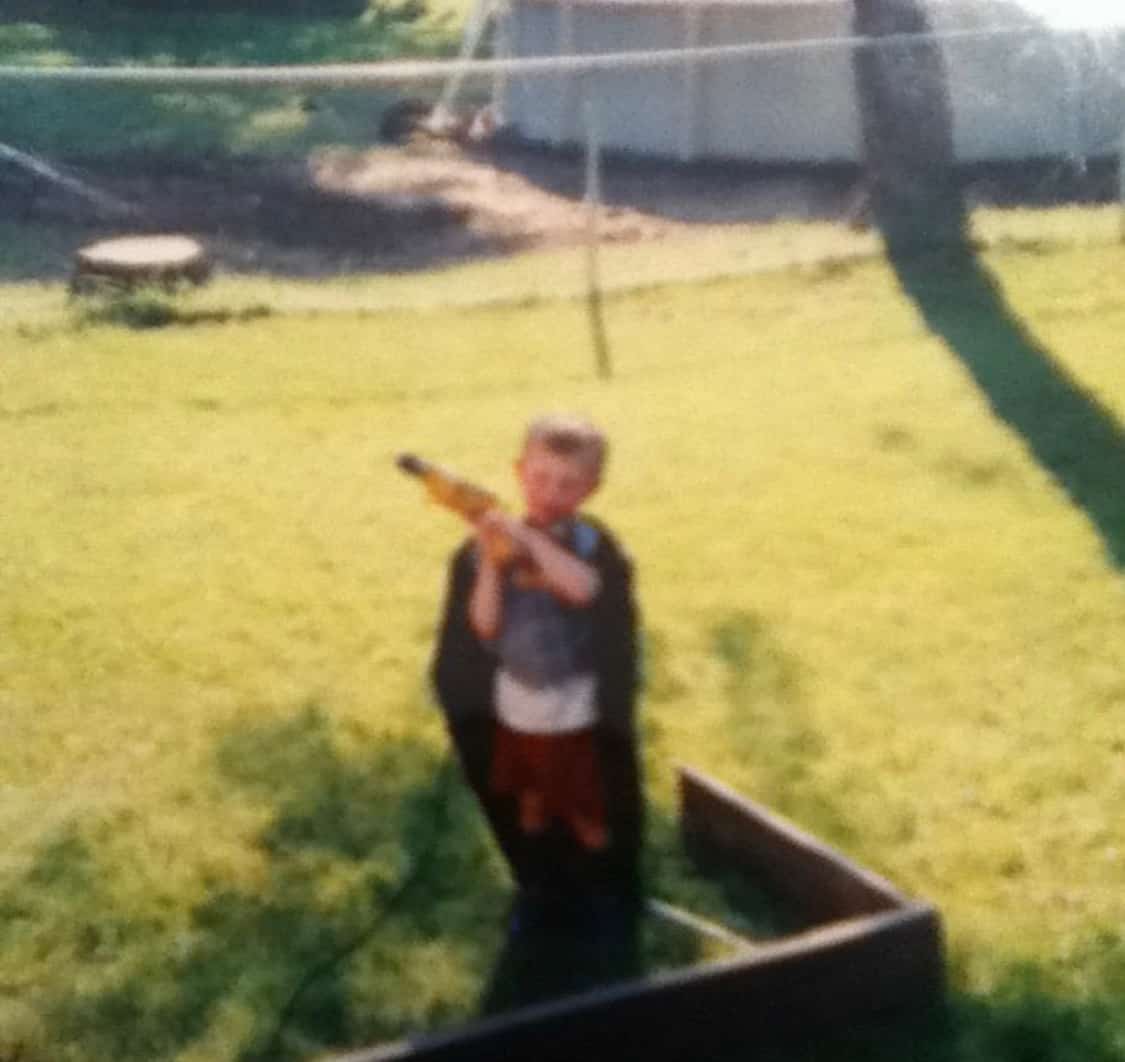 My journey into fitness began many many years ago.

Back when I was curling power drills for 3 sets of 10 in my batman costume.
okay, not that long ago…
It really all started when I boxed in the 3rd and 4th grade, which required me to be in very good shape. Through boxing I would occasionally bench press, but not ever so often being that young. I would also do push ups, but mostly, I committed to things like jumping rope, and hitting the speed bag and heavy bag as well. Through boxing, I learned at a young age what being in good shape does for you, mentally, physically, as well as how it feels, and how it helps you in life.

I also played football, and lacrosse around those times as well. Boxing helped me in those sports...because I was in great shape, and had great relative body strength developed for those sports due to my boxing regimes.

Fast forward to the 7th grade for me, I decided that, given my relative strength and athleticism I would go out for the wrestling team. I wasn’t that bad of a wrestler but WAIT.... I remember it clear as day. Me and my buddy are warming up one day during practice, practicing takedowns.

I go to do an arm drag on him, and I rightfully did something wrong technically, which cause my arm to get hooked into his arm/torso (to illustrate: imagine me standing behind my buddy, bear hugging him from behind, And then going to thrust him to the ground, yet my one arm is not all the way wrapped around his torso— it’s kind of halfway around his torso).


Essentially, my buddy’s 150+ pounds, which was way more in force due to him being slammed; came crashing down right on the middle of my arm that was at a 45 degree angle; with my elbow being on the ground first, but my wrist being tucked into his torso holding it up at a 45 degree angle as he landed....CRUNCH!

I wish I still had the pictures, but if you ever happened to watch that MTV show “Scarred” I believe I would’ve gotten approved. In fact, my arm is permanently scarred.

Check out the picture below; see those pink dots (I had screws in my arm for over 3 months to fix this mess). 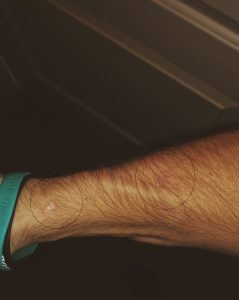 I’m not kidding when I tell you my arm was bent in the shape of a "J" ... yuck!!
But... fast forward after I’m healing, and it’s the late spring/early summer of my 7th grade-year/going into my 8th grade year.
It’s time to train for football, I didn’t do any upper body work for over 3 months. I’m out of shape, I’m weak, what do we do? We hit the weights.
At this time I started working out with the football coaches at the school, getting started on an actual weight lifting routine. One consisting of bench presses, squatting—actually to parallel, and hang cleans; plus, the occasional ‘curls for the girls’. A little over a month of this, and doing my push ups and stuff and I start getting a little stronger. However, school ended and summer hit. It was now hard to make it to the weight room at the times that they were open & compatible with my ride situation

So, I got a YMCA membership, and I rode my bike to the local YMCA 4 days a week. At this point, I started making my own workout plans, tracking the weight used, getting protein shakes, and eating brown rice: all that fitness and nutrition stuff. Now I was doing this steadily for a while. If I haven’t bored you yet, and you still happen to be reading; I appreciate you.

Now is where it gets interesting…
Now is where we discuss the biggest turning point of my journey, how that got me into this world, and what that did for me.
If that doesn’t sound like a hassle, than I am pleased to introduce myself to you.

My turning point:
My freshman year, I did well in strength and conditioning that summer as well as my previous 8th grade football season. With this, I was pulled up to play JV, foregoing playing on the freshman team. This may have been one of the best things that ever happened to me.
The reason being. Lessons.

Not too far into our season, I broke my hand. I took a pitch to the left side, made a juke move, got drilled in the front, then drilled in the back. Momentum of this sequence, propelled my body 90 degrees parallel to the ground and airborne, with my chest facing the ground, I essentially did a belly flop. My hand however, was beneath my chest during this, as the story goes….I land. Crunch. End of season for me.

Fast forward to the end of the season, I get my cast off and I get cleared to workout and resume activity again. Well, I’m weak, and I lost muscle, exactly as expected. So, like any athlete would probably do in this case. I get back into the gym! I make my own workout regime, doing bench press, military press, pull ups, rows, box jumps, box squats, Bulgarian squats, Romanian deadlifts; all the athletic essentials.
After a few months of this, I get strength back and progress even more. I’m now in the best shape of my life.

But then happens... my first major shit storm of my life.
I get diagnosed with hypothyroidism. If anyone knows what that is, you get sluggish, tired, a little depressed, and it just sucks. Okay— I battled through, I still worked out, etc. I get put on medication to fix my levels, it works a little, but wait....I now REBOUND to HYPERthyroidism.
When this happens, you’re the opposite of HYPOthyroidism, Everything speeds up like crazy. Your metabolism speeds up, you’ll even notice your actual heartbeat through the day is very fast.

The worst part is, you can’t sleep at night; the reason being, since your body is so sped up, you can never stop fidgeting or twitching during the night. In other words, not only is it really hard to relax to begin with because of your increased metabolism, etc. but you also can’t sit still long enough in order to let yourself actually fall asleep. Given this, I went through a very bad phase of insomnia. For about 2 months, I was lucky to get more than 3-4 hours of sleep, weekends included. I was freaking gassed, but whenever I did fall asleep, I’d wake up in the middle of the night with no chance of falling back to sleep....even on the weekends.

Moreover, this put my cortisol and other catabolic hormones through the roof, combined with my extremely high metabolism, the drawbacks amplify more.
So, I worked my ass off after breaking my hand, got in good shape, and fell back to square one. During my hyperthyroidism phase, I went from 158 pounds to 144 pounds, which was actually lighter than I was after breaking my hand.

Fast forward after my 2 month insomnia hyperthyroid phase, I get my levels secure. Now, it’s during my lacrosse season and I decide to do a little bit of weight training, after school and before practice, but nothing too intense. I decide to do just a simple in-season routine through our strength program to help restore some strength, along with taking some protein shakes and eating more. I’m optimistic here.

But...one day, early in the season,I’m doing squats and as I’m completing a rep I get a razor sharp pain in my rhomboid muscles of my back. Great! this wasn’t a quick pain though, in fact it persisted, and even got tighter and more painful as time went on. It turned out to be a bad strain.
I missed half of my lacrosse season that year.

Fast forward to the latter part of the season, I was allowed to play again, but was not able to lift during my return due to my healing phase. My back also just wasn’t ready for that yet either. Now it’s after the season...I’m weak in my upper body, and I’m lacking a lot of explosiveness in my lower body due to not being able to squat, or do much jolting exercise besides actually playing the game itself (many athletes reading will probably understand this ‘play through pain’ type procedure).

I just went through almost a full year of ABSOLUTE hell. Multiple ups and downs, but that’s life right? We get offered another set, and we get back under the rack and go get it again. With this in mind, there’s one thing left... football season is coming up again, the expectation level is high for me, and I have to get myself ready. I have hardly any time... I need to get bigger, stronger, more explosive, and ready to be a competitive football player again... With this, I became obsessed about knowing everything there was to increasing performance.

I needed to get as strong, as fast, and as explosive as I possibly could, in a very little time frame. In terms of where I was at in my training after my back injury, I was extremely far behind where I should have been. Honestly, my numbers and my explosiveness, was embarrassing.
This led me to relentless research at the end of spring and the beginning of summer.

I would go on YouTube for hours, and watch the likes of Joe Defranco, Elliot Hulse, Chris Barnard, Mike Westerdal, some of the best in the industry, totally immersing myself in that field of knowledge. Until it was time to train, I would go train and then come back and do the process all over again. Working on my craft physically and mentally.

I would quite literally, research, eat healthy, train, research, make adaptations and updates to my strategy and implementation. Rinse, repeat, do it better continuously.

In the end, it worked! I came back to training camp in the absolute best shape of my life. I was as explosive as I have ever been, as strong as I have been, not to mention my squat, box jump, and 40 time skyrocketed that summer. I learned all about how to properly train the nervous system, relative body strength, increase your rate of force development, train your feet to be like springs when they strike the ground, and build an extremely meaty and explosive posterior chain.

After this, I went on to make my own plan again after football season, focusing more on gaining mass in the off season, while also, increasing my explosiveness simultaneously. At this phase of my journey, I came to understand how to eat for mass gain, and apply things like single leg-training and plyometrics—as you get bigger, so you can adapt to your increased body weight and not lose a step, etc.

Over the course of about 2.5-3 months, I managed to gain over 20 pounds of muscle, and explode my bench by 60 pounds. I also got significantly more explosive by increasing my squat by around 60 pounds as well, and increasing my vertical by about 4 inches. I realized with some proper strategy—both technically, and nutritionally, as well as some skin in the game, you can do some magical things with this whole fitness and nutrition thing.

This remained my gold standard throughout the remainder of high school It was through this, and learning more about fitness and nutrition, I began to develop a passion for it. I began to understand how misled some of us can be in this field and why.

Fast forward to college, and I began to study a bit more in terms of the non-athletic population, such as physique transformation and that realm, as a hobby.

Ultimately I believe I’ve found ways to reach both athletes and the average population.
Fast forward to today, where I don’t play sports and my approach is more simplistic, and lifestyle based, with a focus on staying lean effortlessly, while also enjoying life. 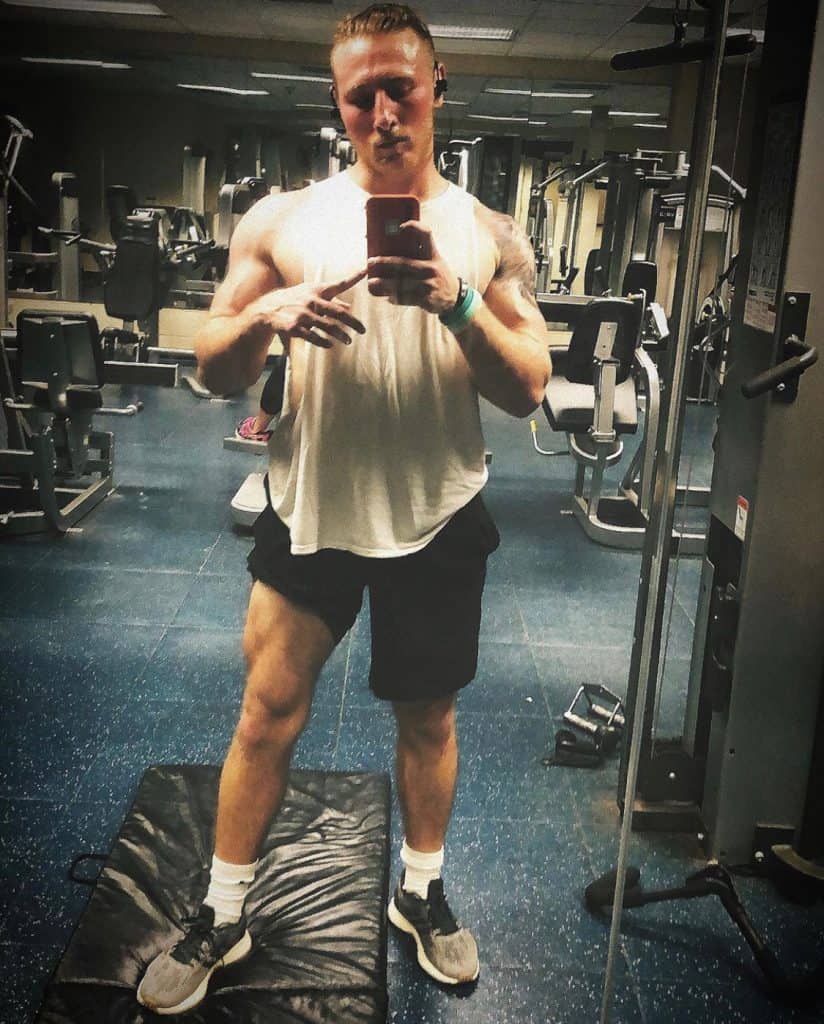